Home » How Does Your Garden Interact? 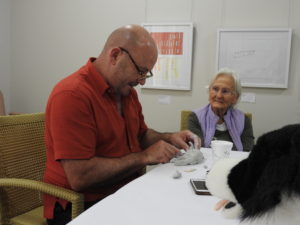 Metal clothes cathcing the breeze on a washing line, a spinning porcupine playing music… These are but two of the creative and fun art works residents of the Jemalong Residential Village (JRV) are working on for their sensory interactive garden.

The pilot Art Connection program for residents of Catholic Healthcare’s JRV culminated in an exhibition in December last year. This year the Art and Dementia program will run eight workshops to inspire sensory interactive art for the garden.

“Getting to know the JRV residents and facilitating the workshops is a real hoot,” said Solange Hershaw and Damian Cast, aldi, company directors of The Last Bureau, an Australian arts and digital media production company.

“I have never had so much fun,” said Maureen, while Una was sure her dog sculp- ture needed to be more in proportion, “as it has a horse head”. Damian helped her make a larger body to fit Buffy, her dog.

So far two sensory pieces have been completed and will be displayed on bollards in the garden.

The first is inspired by resident Lillian Goldstraw’s drawing of washing hanging on a line. “We have replicated it in metal and have a fan underneath so that when someone approaches, the clothes spin,” said Damian.

The second piece is a porcupine sculpted by resident Clare Inwood. When someone approaches, it will spin and play music by the Frank Bourke and White Rose Orchestra. The orchestra is well known as they played at dances throughout central western NSW during the 1930s to 1960s.

“We underestimate those with cognitive impairment and it just makes my heart sing when I see how the residents talk about their work,” said Gwen.