You are here: Home / Articles / Help Us Build A School In Nepal 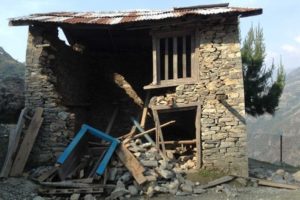 The team at Flannery’s Pharmacy is busy raising funds to build a school in Nepal.

“The Nepal earthquakes in 2015 were devastating,” said Debbie Prior, Manager of Flannery’s Pharmacy. “In addition to significant loss of life, they caused damage to over 35,000 classrooms across the country, leaving more than a million children lacking access to safe learning spaces.”

The magnitude 7.8 earthquake and subsequent tremors which struck Nepal two-and a- half years ago claimed the lives of 9,000 people, injured tens of thousands more and destroyed homes, schools and roads.

In the Lower Solukhumbu region alone, 200 schools were destroyed and more than 600 classrooms lost.

The Flannery’s team has been busy raising funds for this worthwhile cause. Recently, team members provided home baked morning tea to local businesses. “We raised roughly $400 thanks to the generosity of local businesses and their staff,” said Debbie.

“Our next fund raising activity will be an Easter basket raffle, so please call in to Flannery’s to buy a ticket or make a donation,” said Debbie.