You are here: Home / Articles / Heavens Open Up As Royals Visit Dubbo 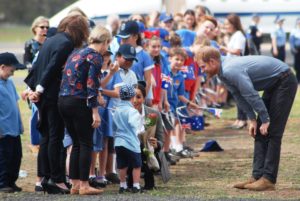 Thousands of people from all over NSW descended on Dubbo on Wednesday for the Royal visit, but it was a spontaneous hug and torrential rain that will remain as lasting impressions for many.

Five-year-old Luke Vincent stole the show when he not only gave Prince Harry a hug, but also started stroking his ginger beard upon welcoming the Duke and Duchess of Sussex on their arrival at the Dubbo Airport.

Luke was part of a group of school children waving Australian flags and jumping with excitement as the royal couple stepped onto the tarmac.

Despite running behind schedule, the Royal couple took their time greeting the eager students. Little Luke also got the attention of Meghan when he handed her a bunch of flowers followed by one of his now famous hugs.

Meanwhile thousands of people, with many dressed in all sorts of Royal paraphernalia, had gathered at Victoria Park for the community picnic. Spirits were running high, despite many arriving as early as 4am to secure a good spot, while others reminisced about attending the Queen’s visit in 1954.

As the Duke started his speech, the heavens opened up. Meghan stood next to her husband holding an umbrella, as the Prince said: “The best part about visiting country Australia is the people. You are the salt of the earth. That resilience, sense of humour and commitment to the land are the qualities that make you unique, you are the backbone of the country.”

He ended his address saying: “The rain is a gift!”

The large crowd stood fast in the rain, with many hoping to get another glimpse, photo or even a handshake. The couple said they wanted most of all to meet people on their visit.

While a mother and daughter from near Narromine did not get a chance to hand over their bouquet, they were very happy to see the Royal couple again after they had gone to England earlier in the year for the Royal wedding. “It was very special to see them here in Australia,” said Jo. The Duke and Duchess also also met a local family on their property Mountain View Farm, about 25km from the Dubbo, to see and hear the hardships people in the area were facing due to drought.

Meghan baked banana bread for the family, which she prepared the previous evening at Sydney’s Admiralty House.