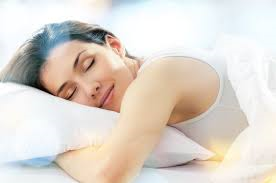 Getting a good night’s sleep has a greater impact on our happiness than getting a significant pay rise.

That’s according to new research, which suggests the most content people feel well-rested “most of the time”.

The Living Well Index, created by leading researchers at Oxford Economics and the National Centre for Social research, also found that health of relatives and feeling connected to the local community all impact our overall wellbeing.

However, sleep was found to have the largest impact by far, with getting enough shut-eye having a greater impact on happiness than a 50 percent raise.

Participants were then given a “Living Well” score out of a possible 100, equating to the highest possible level of happiness and wellbeing.

The researchers concluded that the average person currently has a Living Well score of 62.2 out of a maximum of 100.

Those “living best” are defined as the 20 percent of the population with the highest scores – falling between 72 and 92.

By comparing the lifestyles and behaviours of those living best with the typical person, the index reveals the critical factors behind living well.

Income has surprisingly little impact on how we feel. For the typical person, a 50 percent rise in disposable income contributes to just a 0.5 point increase in their Living Well score.

In contrast, a good night’s sleep has the strongest association with how well we feel we are living. For the typical person, improving their sleep to the level of those who are living best would be equivalent to them having more than four times as much disposable income.

These were among the factors found to separate a typical person from those living best:

1. A Good Night’s Sleep: With a typical person only feeling rested after sleep ‘some of the time’, the research found that sleep quality can explain 3.8 points of difference between their Living Well score and those who are living best in the top 20 percent of the index.

2. Job Security: Among working people, 43 percent of those with the highest index scores experience a very high degree of job security, almost twice the national average.

3. Health of Close Relatives: For the typical person, worries about the health of close relations emerges as a significant barrier to living very well.

4. Community Connectedness: Stronger connections with the people we share a community with is an important factor for those who experience the highest quality of life.