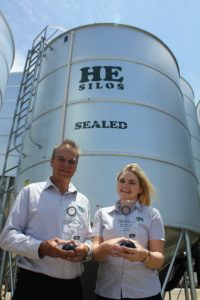 The Forbes family business of H E Silos was named the 2016 Business of the Year by the state’s peak business organisation, the NSW Business Chamber. There were more than 150 finalists competing for the top award. CEO Steven Morrison was also called up as winner of the Excellence in Innovation category at a black tie gala dinner attended by more than 1,000 guests in Sydney at the end of last week.

“It is just amazing, we are still in shock,” said Steven and his daughter Stevie Morrison earlier this week. They were still on a high after attending a function of the CEO Club at the Sydney Opera House on Monday night. “I have never had such an experience to meet so many CEO’s who allhave a passion for running an excellent business,” said Stevie.

H E Silos has been getting a lot of media exposure, “which is great for Forbes after all the negative media after the floods”, said Stevie. But she felt the biggest compliment came from the judge Joe Spencer. “She said our entry was very well presented. After reading it she completely understood the product and felt she was part of the business.”

The prestigious award recognises overall business excellence in the areas of growth, innovation, export, sustainability, employment practices and ethics. NSW Business Chamber Chief Executive Officer Stephen Cartwright said he was delighted a regionally based business received the top accolade. “Regional NSW is home to so many wonderful businesses with incredible stories and it was fitting that, as we celebrated the 190th anniversary of the NSW Business Chamber, H E Silos was announced as the winner,” the CEO said.

Steven’s parents commenced operations in 1969 as Hillston Engineering, located in Hillston NSW. It was originally an engineering company, but evolved into the agricultural industry and in 1972 started the construction of grain silos. In 1984 the company moved to Forbes. Today they are not only passionate about grain storage, but to ensure food security in Australia and the world. They have developed the Thermal Insect Control System (TICS) to address an efficient and effective way of grain storage by fumigating silos from the ground level. This innovative approach reduces safety risks as well as losses due to insect infestation, contamination and degradation.

According to Steven, Australia is the world leader in grain storage techniques. “There is a lot we can show the world to ensure food security for the future.” H E Silos mainly focus their business on the east coast of Australia, but have been dealing with international clients in New Zealand, Fiji, Japan and New Caledonia. “There is plenty more to come,” said Steven looking to the future. They dedicated their success to the team of 43 full time employees.

“This award is a result of the hard work, dedication, commitment and loyalty of our team.”