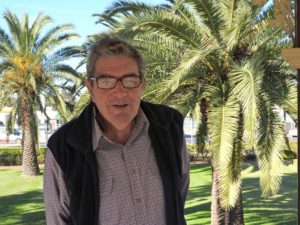 Forbes local Colin Hodges was awarded an OAM on Monday.

Forbes’ own Colin Hodges has been awarded an Order of Australia Medal (OAM) in this year’s Queen’s birthday honours for service to the horse racing industry as a radio broadcaster.

A local all his life, and a shearer until he turned 49, Colin has been calling races for 47 years. He is well known throughout the region but is perplexed by the award and the attention it brings with it.

“Geez, all I did was get up and call out a few horses’ names,” he said with a chuckle.

Growing up on a property in Bogan Gate, the first hint of his future in race calling appeared at school when he was nine years old, when he rounded up kids and had them trotting around a made-up track while he called the race.

But it was the late Bobby Gunn who brought him into the business. “He got me in and had me practice with a tape recorder. At Gooloogong he gave me a call one day, and that’s when I started – in 1970 and I was about 20.”

He also spent 14 years calling races in a jungle in Vanuatu to support fundraising for disaster recovery.

What has been most rewarding for him was the wonderful people he’s met, and their resilience when there have been hard times. “They were still willing and found the energy to organise their annual race meeting and bring the community together.

“I feel privileged to have met all those people who have been so resilient and so generous with their time, and the people who train and ride the horses,” he said.