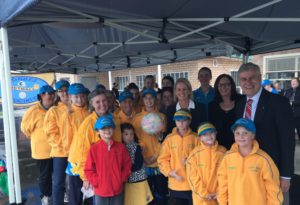 A re-elected Coalition Government will invest $600,000 to replace nine existing netball courts and build three new courts in Forbes. Minister for Regional Development Fiona Nash made the announcement last Saturday while visiting Forbes with the Member for Riverina, Michael McCormack.

Minister Nash said the new netball courts were critical to keep netballers, young and old, involved in the sport across the region. “It was disappointing when the annual netball carnival was cancelled for the first time in 40 years because of the poor state of the courts. I am delighted we can help ensure the carnival will be back on next year.

“Sport, especially team sports, are a great way for people to keep fit and active, and I enjoyed many years playing in local netball teams myself,” Minister Nash said. Mr McCormack welcomed the announcement, saying that local sporting clubs like the Forbes Netball Association make a positive contribution to the community and are a critical part of the local social fabric.

“Sports clubs play a very important role in regional communities, they provide opportunities for people to catch up with one another and feel involved in local activities. “With more than 450 members aged from five to fifty plus years, and some people regularly travelling more than 100kms to attend matches, the netball centre has a footprint right across the region,” Mr McCormack said.

Robyn Kenny from the Forbes Netball Association said they were extremely excited to receive the funding. “We have been planning this project for a long time and the Government’s contribution puts us years ahead of what would be possible without this funding. It will immediately upgrade our netball complex to standards we could only have imagined,” said Ms Kenny.