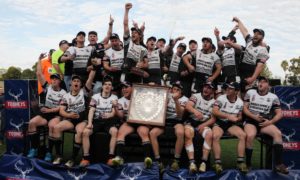 The Forbes Magpies put in an incredible performance to come from behind and win the Group XI Rugby League grand final in Dubbo 26 – 22 on Sunday. Taking on Dubbo CYMS, who have been undefeated for two seasons, was a daunting task for the Mapgies, but coaching coordinator Cameron Greenhalgh said this diasadvantage only ramped up the players’ enthusiasm.

“We were massive underdogs going in, but we knew that we had the side, we had the belief that we could win,” Greenhalgh said. With 12 minutes to go, CYMS had pulled out to a 10 point lead, but two tries in the final minutes gave Forbes the impressive victory.

Acknowledging that Forbes is sporting a very young team this year, Greenhalgh said it was difficult to single out top performers. “Our captain-coach Jake Grace won the Bob Weir Medal for man of the match, and he certainly led by example. “They were all excellent. They’re a young team, but have great confidence and big game performance,” Greenhalgh said.