Home » Golfing For Can Assist 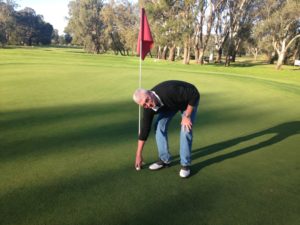 On Saturday 11th June the CanAssist Golf Charity Day was held. The four person Ambrose event brought a competition spirit and lots of fun to the venue and a good field of 114 players assembled from Forbes and other local districts, with some players coming as far as Queensland, Sydney and Victoria.

The Handicap Winners were J Tranter, S Tranter, D Herbert and M Sykes with a 55 nett. The Scratch winners were G West, D West, J Denamiel and S West with 64. Overall, nett scores were very close. Once again the contribution by sponsors, players and donations was exceptional, with over $2,500 being raised. This will help support local cancer patients in their battle to gain health.

On Sunday and Monday a Stableford Medley was played each day. Fields were slightly down, but each day was well contested. Sunday’s winner was Lee Grierson with 38 points, on count back from Ray Taylor who also had 38 points and Monday’s winner was Doug Churchill with 39 points. This also was a count back win, with Phil Maher coming in second with his 39. Phil took the greatest honours for the day though, scoring a hole-in-one on the 18th. He used a 6-iron to land the ball short and have it bounce onto the green and run
into the hole. Both he and the shot are elegance personified!

This shot ensured he got the ‘Nearest the Pin’ on that hole. Tomorrow will be the Daine Doolin Memorial event, which is a 4BBB Stableford Medley.