Home » Golfing Back To Groups 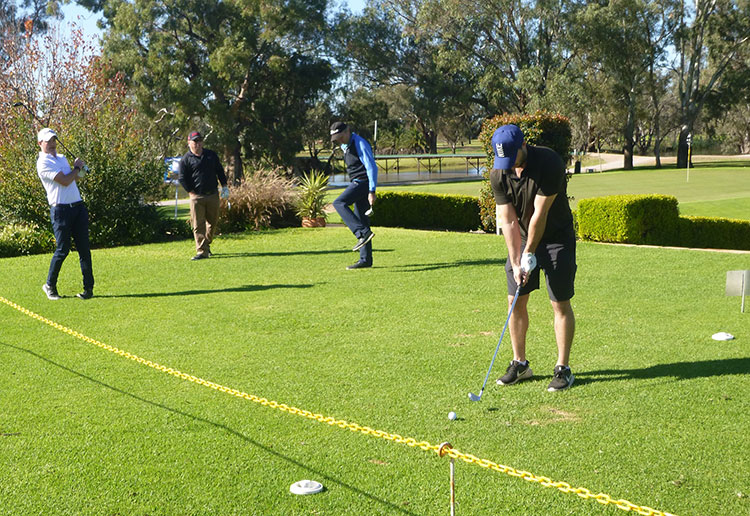 Jacob Bernardi tees off in a group of four with Joshua Coulthurst, Andrew Dukes and Kim Herbert.

Beautiful conditions helped all 88 golfers to enjoy their return to group golfing, just in time for the Men’s 4BBB Stableford event, sponsored by Forbes Livestock & Agency.

The winners, on count back, were Jeff and Max Haley with 46 points. Runners-up were Neil and Cam McMillan, whose 46 points came on the back of a very fine round by Cam, who shot a 69 scratch.

The ball sweep went to 40 points on count back. Players are advised to check in the Pro Shop to see if they are to collect a ball. The NTP’s went to Jeff Haley and Alf Davies. The best ‘2’ was a chip-in on the 3rd by Neil McMillan.

The best score of the day was played by John Betland, with a 65 scratch. His team was ousted from prizes by handicap. Another good effort was the eagle ‘3’ scored by Jonathon Cutler on the 15th hole.

The Sunday Stableford Medley had some good scores. Andrew Dukes won with 38 points, followed by Barbara Drabsch on 33 points.

The ball sweep went to 31 points, picked up by Jill Cripps. No NTP’s were played.

In the fourth week of the Winter 9-Hole Individual competition, 38 players posted some consistently good scores. Voucher winners were Riley Pike with 32 nett, and Corey Hurford with 34.5 nett. The balls went to 34 nett on count back.

On Tuesday 12 May, 20 players enjoyed the Tuesday Golfers social play, still in pairs. The winner was Viv Russell with 32 points followed by Andrew McDonald on 30 points as runner-up.

The Thursday Veterans had 19 players, again in pairs. The winner was John Smith on 31 points, ahead of Geoff Drane on 28 points. Both picked up vouchers. A sad story was the loss of a wallet by Graham Newport. He quickly cancelled credit cards and arranged for a new driver’s licence. A few days later the wallet was found in Barry Shine’s bag. Figure that one out.