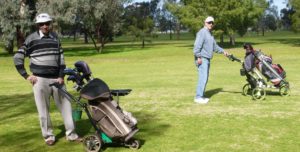 Alf Davies and Ron Morris won the A and B divisions respectively of last Saturday’s Individual Stroke event, sponsored by Complete Plumbing. Alf won with a very well-crafted 70 nett. His driving was nearly immaculate every time. Brian Doyle was unlucky to be runner-up, being shifted into second spot by
virtue of a count back.

In the B division, it was also a close event with Ron taking the honours with a nett 71, followed by Geoff Drane with nett 72. Ron was his usual tidy scorer, while Geoff Drane played like a resurgent demon possessed with magical skill. The scores were higher than expected given the good conditions with a field of 45 players enjoying their wander around the course.

Jill Cripps finished as runner-up with 37 points, on count back from three other players. The NTP’s went to: 9th B Drabsch and 18th L Godden. Neither managed a ‘2’, and nor did anybody else. The ball sweep went to 37, and was picked up by Ray Taylor, Scott Kirkman and Craig Barrett, who all played in the same group.

With some good weather of recent weeks, there were finally enough cards returned to sort out the Winter Individual Comp. These results cover the period from 10th July to 28th August, just showing how difficult it has been. The eventual winner was Bede Tooth with 34 nett, and this achieved on a day that did not assist him with sunshine or balmy conditions. Balls go to Stuart French (35), Ethel Coombs (36) and Fran Smith (37). Daniel will be running a Junior Golf Camp on 28th and 29th September in the school holidays. Contact him on 6851 1554 for details.