Home » Gloves On At Fight Night 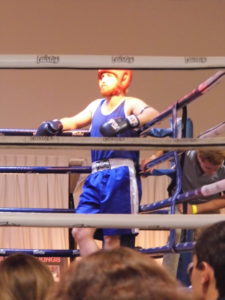 On Saturday night four of our local boxers tested their skills at a ‘Battle at the Bron’ fight night held at Oberon RSL. Dreamtime Sports Academy, promoters of the event hold events such as these approximately once a month throughout the Central West with the next event scheduled for Saturday 28th May at Blayney.

Local boy, Jimson Mores has been attending boxing training in Parkes for the past seven months with well-known trainer, Tommy Ward. Although Jimson’s mother gets very nervous when he fights both of his parents are very supportive. Jimson went three, two minute rounds with a worthy opponent on Saturday night and although he lost the bout is going to work on his fitness for his next fight in Blayney in a couple of weeks’ time. Jack Amor-Dunn has been training for about 5 years and has had six fights since turning 12 years of age, the legal age to compete. Jack drew the exhibition match. Forbes’ Jeff Little encountered a very physical opponent who just got on top of him with points during his first ever fight since commencing the sport five months ago.