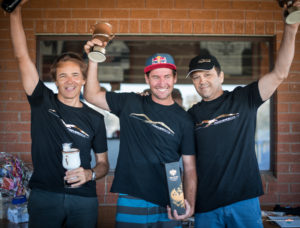 As one of the world’s greatest flat-land hang gliding locations, Forbes saw almost 80 international hang gliders converge on the town this month. Current world number one, Jonny Durand of Australia reclaimed the championship title, with Gerolf Heinrichs of Austria second
and Andre Wolf of Brazil in third place. A total of 76 pilots took part in the 11th Forbes Flatlands Hang Gliding Championships from 30th December, with 69 pilots competing in the open class and seven in the sports class.

Bill’s career commenced in 1967 by setting the first world altitude record by flying his glider to 1,045ft over Lake Tuggerah, NSW. Bill competed until 1974 when he retired from the competition circuit, to focus on glider design and development. He still flies recreationally. “The Championship was held over eight days, and although the first two days were too wet to fly, during the rest of the competition the conditions were excellent,” said Organiser, Vicki Cain.

Many of the pilots travelled 1,200 km during the competition, which is exceptional as that is approximately 30 hours of flying time and many pilots only average 50 hours of flying time per year. Each day of the competition the pilots had set tasks to complete. For example, on
Day 2 the task was to fly 163.1 km from Forbes airport via Toogong, to Tomingly and then to a goal near Alectown where their support vehicle picked them up to bring them back to Forbes.