Home » Get Up And Pokémon Go 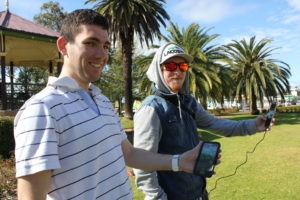 It is the language of Pokémon Go, the hottest game in the app store right now with millions of people playing it all over the world, including Forbes. Released earlier this month, Pokémon creatures are popping up everywhere in the real world and the idea is that you catch them.

One avid player in Forbes, Mitch Watson started the Forbes and Parkes Pokémon Go Community on Facebook with 230 members already. “It is a good community of people and fun to get to know each other and go for walks.”

Mitch was with a newfound friend Phillip Whelan in Victoria Park on Monday hunting Pokémon together. The pair said they both played Pokémon in the 1980’s and 90’s, and this game was the closest to the real thing you could get. “This is part of the game’s popularity, and it is free and gets you out of the house.

Phillip was in Canberra last weekend where he said playing the game was totally different. “As there are many more people playing, there are a lot more Pokémon,” he said. Mitch and Phillip are proud of the rare Pokémon they have caught so far, which include a Dragonair and an Aerodactyl.

They both cautioned players to always be alert and stay safe while playing.
By Maggi Barnard