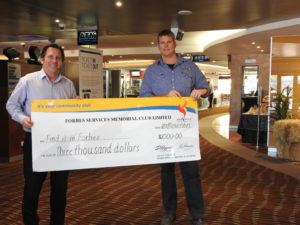 The Forbes central business district will once again come to life at this year’s annual Find it in Forbes Christmas Festival.

The Find it in Forbes promotion will be running from mid-November until 14th December, when it will be celebrated with a Christmas carnival from 4pm to 9pm in Templar and Rankin streets.

The Christmas carnival will include activities from schools, local artists and musicians, a visit from Santa as well as markets for food, and hand made and home-grown items.

The Forbes Business Chamber is aiming to reach many members of the community to make the celebrations even bigger and brighter.

Forbes Services Memorial Club is the naming rights sponsor after awarding a $3,000 community grant to the Find it in Forbes Christmas Festival Parade.

Forbes Services Memorial Club General Manager, David Fitzgerald said: “We are very appreciative of the opportunity to be part of the community. At the end of the day, we are a community club, owned by the community.”

Business Chamber President, Brett Rout said: “We would like to thank the RSL club for their very generous donation and sponsorship.”

Forbes Shire Council is the gold sponsor as they have supported the initiative by giving a $2,000 grant.

Members of The Forbes Business Chamber who are not located in Templar and Rankin Streets are invited to have a free of charge market stall to bring a display or parts of their business.