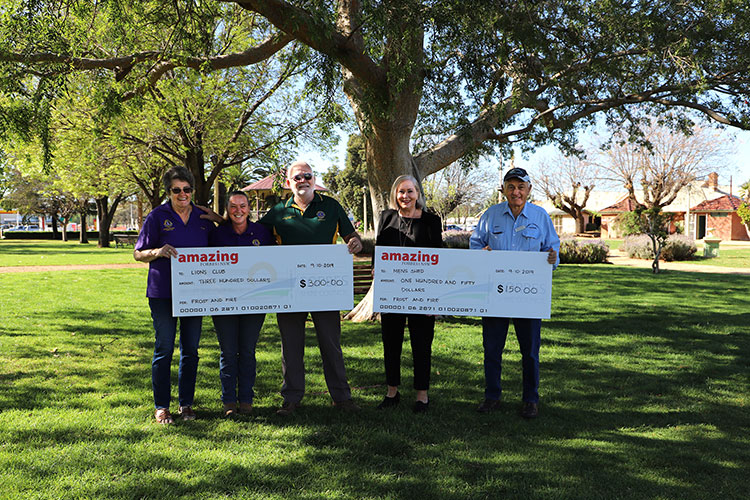 Forbes Shire Council Mayor Phyllis Miller presented cheques to both the Forbes Lions Club and Forbes Men’s Shed recently for their contribution to the inaugural Frost and Fire event earlier this year.

The Lions Club were an integral part of the success of the event, assisting with parking, manning fire buckets for safety and distributing the wish candles to Festival goers. “Ten Lions Club members were there on the night and we couldn’t have pulled off the successful night we had without their help,” says Forbes Shire Mayor Phyllis Miller OAM.

“The unexpected attendance to the event called for more hands on deck to ensure everyone was safe around the amazing fire buckets and displays.”

The Men’s Shed was given the mammoth task of creating the bonfire Effigy, the focal point of the evening before the live entertainment kicked off. As this was to be an integral part of the event, it needed to be a show-stopper and it was. The Club built a metal structure to house the fuel to not only give the fire height, but longevity to burn for several hours while the entertainment performed.

“A big thanks goes to the Men’s Shed who were able to pull this off,” says Mayor Phyllis Miller. “The huge spectacle marked the night, the large size was definitely needed with the amount of visitors in attendance.”

Plans are beginning for Frost and Fire 2020 and it is looking to be bigger and better again. More food and drink vendors and a stellar line up of entertainment are planned.