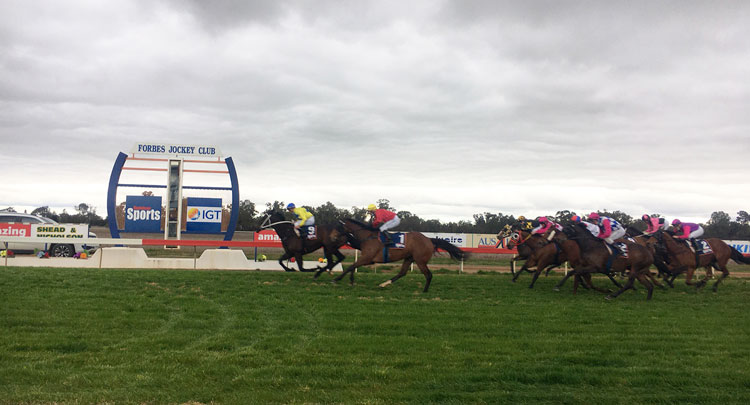 The Gayna Williams Bathurst trained From The Bush has beaten Reward Seeker by 3/4 length with Toulon Brook third in a time of 1:38 to win the Bankstown Sports Club Forbes Cup over 1600m last Sunday at Forbes Racecourse in wet, gloomy conditions.

With rain and COVID dampening the flagship day, a solid turn-out was on hand all things considered, to watch the “deepest field to ever contest the Forbes Cup” according to caller Col Hodges who was celebrating 50 years as a caller. It didn’t disappoint.

Forbes Jockey Club started with a strong eight-race-card and $270,000 in prizemoney on offer. The record prize money saw some very competitive racing with She’s Smart taking the chocolates in the Shead Nicholson Class 2 Handicap for Claire Lever while Lockdown Gamble won the preceding event.

Yet all eyes were on the main event and jockey Anthony Cavallo rode the five-year-old brown gelding to perfection holding off more fancied rivals on a heavy track that copped more rain throughout the day.

Coming from barrier 14, From The Bush was carrying 55kgs and had brought solid form into the showcase event with four wins from only ten starts to go with two seconds and a third. The horse had never won at this distance having only won at 1400m so the challenge was there to go where it hadn’t gone before and it did.

Sitting among the leaders with the straight in it’s sights, From The Bush scooted to the front leaving challengers in its wake as they headed for the post. The Poet’s Voice cross Endaxi sprinter had just enough to keep a swarm of contenders at bay.