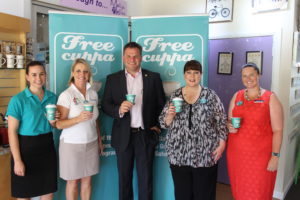 The scheme commenced on Thursday, 1st March and will run through until Thursday, 31st May in a bid to reduce fatigue related crashes on NSW roads.The ‘Free Cuppa for the Driver’ scheme offers drivers who have travelled more than 100km from the address on their drivers licence a free cup of tea or coffee from any of the 94 participating businesses in Western and South Western NSW.

Parkes, Forbes and Lachlan Shire Councils’ Road Safety and Injury Prevention Officer, Melanie Suitor said that since its inception in 2010, over 6,000 free cuppas have been given away by 185 participating businesses throughout 161 cities, towns and villages in Western and South West NSW.

“Fatigue is one of the biggest killers on NSW roads, last year it contributed to 72 fatal crashes in NSW. “The ‘Free Cuppa for the Driver’ scheme targets all drivers; cars, caravans and also heavy vehicles – because all drivers face the risk of becoming fatigued whilst driving,”
Melanie said.

Eligible drivers can also enter the draw to win a prize and fuel vouchers to the value of $600.