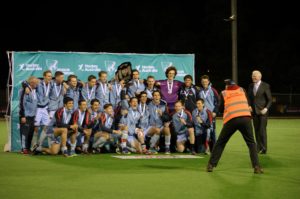 Twenty year-old Kurt Lovett is living his dream. Kurt moved to Sydney when he left school to play hockey with the NSW Institute of Sport, and has been going from strength to strength ever since. Earlier this month Kurt captained the NSW Under 21s Hockey Team, claiming gold in the National Championships that were held in Wollongong. The NSW sky blues topped off an undefeated season and claimed victory over QLD in a match that provided an antidote to the State of Origin.

“It was a bit of a relief to finally get the gold medal,” he said. However, Kurt’s success isn’t limited to national fields. Last year he represented Australia in the Junior World Cup; so far hockey has taken him as far afield as Vanuatu and South Africa. He will soon be heading to Germany to train for an Australian development side.

“It’s going to be my first trip to Europe,” he said. “We’ll be playing a few different European  sides while we’re there. I hope to do a bit of sight-seeing, there’s a few rest days but training is always pretty intensive.” But he said it’s not just the travel or the wins that make it such a satisfying pursuit.

“It’s a sport that really keeps on giving, there’s always something to improve and something to get better at.” His love of hockey was fostered at a young age. “I started playing when I was about seven or eight,” Kurt said. “It’s a team sport which is awesome for young kids. It also really develops good hand-eye coordination,” he added, “it’s such a fastpaced game, so it keeps you fit.”

Kurt credits the unique hockey environment at Parkes as part of the reason for his success. “In small towns you get an opportunity to play with a lot of older people at a young age,” he explained. “You develop your game a lot sooner and you are a lot tougher on the field.”

Kurt is aiming for a professional career in hockey. “I’d have to move to Perth for the Australian Institute of Sport, because that’s where the National Hockey training is based,” Kurt explained. “I would like to go to the Commonwealth Games, and Tokyo Olympics, so if I keep improving, that’s the ultimate goal.”