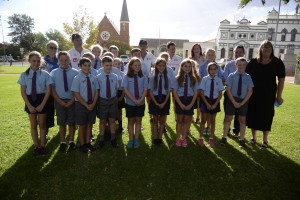 Former Prime Minister of Australia Tony Abbott made an emphatic visit to Forbes this week as part of the annual ‘Pollie Pedal’ tour, on Wednesday. ‘Pollie Pedal’ is an annual cycling tour, undertaken by federal Members of Parliament, to raise much needed funds for the Carers Australia charity.

The tour is now in its 19th year, with this year’s installment seeing the politicians start and finish in Canberra. The politician’s visit to Forbes saw them ride into the town’s Victoria Park, where they met with local school students, Carers Australia representatives, representatives from Forbes Shire Council, as well as local media.

Mr Abbott was joined by Kevin Andrews MP and Angus Taylor MP in giving speeches at the park, as well as Forbes Mayor Phyllis Miller and Carers Australia CEO Ara Cresswell. They then stayed the night in Forbes. Before arriving in Forbes they travelled from Canberra, through Yass, Harden, Cootamundra, Temora and West Wyalong.

After their Forbes stay, they then hit the road again to pass through Canowindra, Orange and Bathurst, amongst other places, before finally arriving back in Canberra. Speaking with The Forbes Phoenix, Mr Abbott said it was a huge commitment by all politicians involved with the ride to cycle
over 1000km and take the time out of their busy schedules for such a good cause.

“We rode from West Wyalong to Forbes today, but took the very long route, and rode 146km. It’s been a very tiring and hot day,” he said after arriving in Forbes. “We’ve raised over $4 million in the 19 years we’ve done this ride, and we’ll be raising $300,000 alone this year.” Ms Cresswell said the tour had huge benefits for Carers Australia, with just under three million unpaid carers in Australia in need of its support.