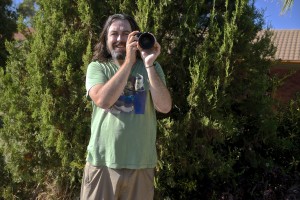 Forbes filmmaker Dane Millerd has realised his dream of making the big time in film, with his film about Australia’s worst female criminal to enter Hollywood.

In 2001 Katherine Knight became the first female in Australian history to be locked up “never to be released”. Her crime involved stabbing her partner at the time, John Price, 37 times in a horrific murder.

Ms Knight then beheaded her victim, skinned his body and cooked it. She had planned to serve him up to her own children with vegetables and gravy, before she became comatose from an overdose of pills she had taken. Police arrived on the scene before her meal could be served. She is serving her
sentence at Sydney’s Silverwater Women’s Correctional Facility, and had an
appeal for parole turned down in court a number of years after her sentencing.

Mr Millerd managed to obtain the rights to a book about Katherine Knight’s shocking crime last year, and wrote a script for the film. US-based film company ‘Shoreline Entertainment’ picked up the script, and it was fast to contact Mr Millerd to express interest in making his film. He will take the reigns of producer of the film while Shoreline Entertainment set most of its direction. The film will be titled “Speckled Hen”, which was the nickname of Knight, and Mr Millerd expects filming to start next year. “Katherine Knight is going to be at least a $3 million film,” he told The Forbes Phoenix.

“I’d like to get bigger players involved [than other movies he has worked on], without sounding selfish, but I want to get people involved who have more runs on the board. They’ll attract a better vibe, bigger stars, and more funding to the project.” Mr Millerd’s background comes from newspaper journalism and music video filming, and he has already made a film, which he considers ‘B’ grade, called ‘Something in the Piliga’- a horror set in Australia.

Despite his interest in horror-themed movies, and the grotesque nature of the Katherine Knight story, he said ‘Speckled Hen’ would be a drama, and not a horror. “It’s certainly a very controversial topic. I’ve had both sides of the divide expressing their opinions, but at the end of the day… there’s been films on 9/11, [Ivan] Milat, and you want to engage with the entertainment.

This film will do its job tenfold,” he said. Mr Millerd will also work on another film, to be set in Forbes, called ‘Are You Scared Yet?’, which he has also got funding of $250,000 from US-based filmmakers Dark Water Productions. This will be filmed later this year.

He will travel to the USA this year to plan the filming of ‘Speckled Hen’, while some proceeds from the final product will be donated to domestic violence charities.