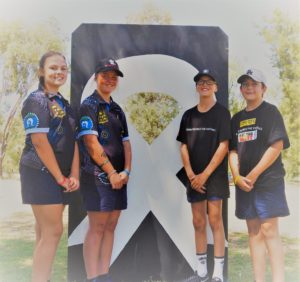 “It is important to remember – it is never, ever a person’s choice or fault to be abused. The guilt and responsibility must always be fitted squarely to the abuser.”

Katrina’s statement followed a quote she read of a victim of domestic violence: “We were young and stupid. Even though it was not right, he had a way of making it seem so. It was as if something in me brought this out of him. So, it was my fault in a way.”

Ochre Ribbon Day is a national event symbolic to Aboriginal people who are surivors of family violence. ‘Today is cultur- ally focused in its values and contributes to the message that Aboriginal people will not tolerate violence against their men, women and children,” said Katrina.

After the serious speeches, students from Forbes High School were cheered on by members of the Forbes community in the Amazing Ochre Race.

The Forbes youth have taken a stand saying, “Domestic violence is totally unacceptable and we are not afraid to tell someone who can help us.”