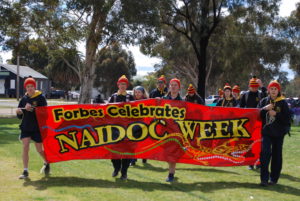 Students from various Forbes primary and high schools and members of the community celebrated Indigenous culture during NAIDOC Day last Thursday. Festivities commenced at the Wiradjuri Dreaming Centre from which participants marched to South Circle Oval for the main event.

Forbes Mayor, Graeme Miller, welcomed everybody to the celebration of the history, culture and accomplishments of the Australian Aboriginal and Torres Strait Islander people. “It is great to see so many young people here today,” he said.

Following this, children from the Wiradjuri choir of Forbes North Public School delighted the crowd with their song and movements.

Students were given opportunity to partake in some Indigenous games and everyone was treated to a barbecue. Finally, a performance was given by the renowned Indigenous dance group Koomurri. The day was filled with celebrations and learning of the Aboriginal culture.