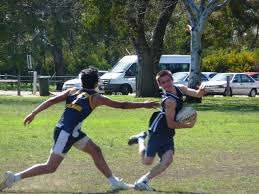 It’s getting warmer and for Forbes Touch Association this means another season is due to commence.
At the AGM on Tuesday 8 September, President Daniel West spoke about another very successful season which saw increases in most divisions with more than 20 games being played each night.

The Treasurer’s report supported this with Forbes Touch having only a marginal loss for the year. With extra end of season prizes already purchased, we are looking forward to another good season financially. All positions on the committee were up for grabs again this year and once again leading the way in the President’s role will be
Charlie Dwyer and Daniel West. They will be supported by a number of familiar faces and newcomers.

The committee is looking at continuing the mid-season BBQ which was a great way for teams to stick around and have a chat as well as watch some of the other teams have a run around.

The 2015 season will run for 9 weeks from Monday 12 October to Monday 7 December, with the Grand Final played on Thursday 10 December for all grades. Registration forms are available from schools, by emailing forbestouch@hotmail.com or over the Forbes Touch Association Facebook page, and must be received by Wednesday 7 October.