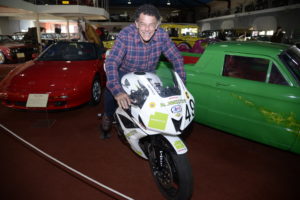 Mrs Muffet said it was a great opportunity for the Forbes Shire to get showcased, especially as Sydney Weekender had not visited the town before. “It’s great that they came and got to see that there is actually a lot of things to do in the country,” she said. “Forbes has so much to offer and the country side is so nice, and personally I’m glad they came out and got to experience it.”

“They told me they really enjoyed their stay in the region, and Mike told me it was as good a stay as what he has had in any city that he’s been to as well.” When the Sydney Weekender crew visited Girragirra, located four kilometres out of Forbes on a rural property, they showcased the best of what the countryside has to offer, with nature literally walking up to the door of their room.

At the Livestock Exchange they attended a relatively small sheep sale of about 20,000 sheep, with Presenter Whitney helping out at the sale. The crew checked out the huge range of historical motor vehicles McFeeters Museum has on display, with Mr Whitney commenting that it was as good as any metropolitan museum he has ever been to.

“This motor museum is truly world class,” he told The Forbes Phoenix last week. “I love my motor bikes, and I’m telling you, I know a lot about them, and what this place has on show is just awesome.”

The episode will go to air on July 10.