You are here: Home / Articles / Forbes Lions Youth Of The Year Quest 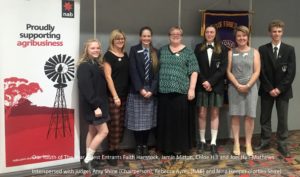 The Forbes and District Lions Club held the annual Youth of the Year Quest at the Forbes Services Memorial Club last Tuesday.

There were four participants this year from three of the district high schools. The participants were Jamie Mitton from Red Bend Catholic College, Faith Hanstock from Parkes High School and Joel Hall-Mathews and Chloe Hill from Parkes Christian School.

Each of the participants submitted a detailed application outlining their school studies, community involvement and sporting achievements among other things.

During the afternoon the participants were interviewed by the panel of three judges, namely Rebecca Ayres from the National Australia Bank (national sponsor), Nina Hooper from Forbes Shire and Amy Shine, Director of Forbes Pre School.

The evening saw each participant answer two impromptu questions and then present a five minute speech on a subject they are passionate about. Judges Chairperson, Amy Shine congratulated each participant on their presentations and performance during the interviews and announced Jamie Mitton from Red Bend Catholic College as the club final winner.

Jamie now goes on to the Zone final next year and will be supported along the way by her parents and members of the Forbes and District Lions Club.

The Leos Club gives students the opportunity to do voluntary community service in a structured environment and each club elects their own President, Secretary, Treasurer and Board Members. There is also a school coordinator appointed and a member of the local Lions Club is nominated as their mentor. They have leadership training available and there are a variety of programs and awards they can be involved in, along with any projects they may come up with as a club.