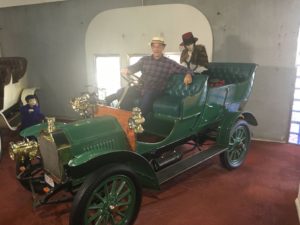 Forbes is a fascinating place to visit. This is what Mike Whitney, host of Sydney Weekender, had to say at the conclusion of the program featuring Forbes that was aired on Sunday on Prime 7. As the second largest network in the country in terms of population reach, the just over five minute feature on Forbes was seen all over Australia.

Starting with a few general shots of historic buildings in the town, Mike first visited the Central West Livestock Exchange where there were over 20 000 sheep on auction. He said he had never seen anything like it in his life. He ended up “buying” some sheep forgetting to keep his hands in his pockets!

Next up he went to the McFeeters Motor Museum where the Barbie Ford Falcon with its gold plated fittings made a big impression on him. The last place to feature was the beautiful Girragirra Retreat where he stayed for the night and Wendy, the owner, taught him to make a sourdough loaf. Locals said they were very impressed with the program, but they felt that it could have showed more of Forbes. “They did not even show the Forbes Lake,” one said.

Mike and his crew were in Forbes last month to film. After retiring from international cricket, Mike first appeared on Sydney Weekender in 1994. He travels around the city and throughout NSW to find the best places to stay, eat and play.
By Maggi Barnard