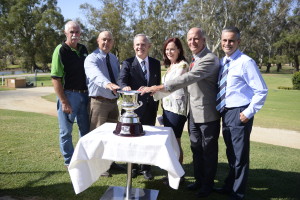 Part of the events will also be staged at the Grenfell Golf Course, with Forbes Shire Council teaming up with Weddin Shire Council to help make the event possible, as well as the two golf associations of each shire working together with Golf NSW. With at least 150 players expected at the State Championships qualifier, and many more at the Sand/Grass Championships, Forbes Golf Association President Andrew McDonald said both events would be a massive boost for Forbes and the surrounding region.

“All of the activities as well as the profiles of each event and the participation opportunities will bring a lot of golfers to Forbes from across the country as well as our own region,” he said. “The winner of the State Championships qualifier will get automatic entry into the State Championships, so that incentive should bring a large number of golfers in
to Forbes.” Several years ago, the state of the Forbes Golf Course was in dire straights, and it would have been hard to imagine any major golf event coming to town, according to Mr McDonald.

At that stage, the Association partnered with Forbes Shire Council, and this led to vastly improved irrigation systems and equipment, and the golf course is now one of the best in the Central West. Mr McDonald said partnerships were what the Association now strived to achieve in order to continually improve the quality of golf in Forbes.

“We were fortunate enough to receive some grants from Golf NSW as well, which helped with our improvements,” he said. “Nowadays we’ve got high quality employees, and new, modern mowers, as well as the Jack Newton golf partnership, where our own Dan Newton works with other golf clubs in our region.”

“We always want to work with other golf clubs, and it’s great that Grenfell are on board with these two events as well.” The Forbes Golf Association have signed a three-year agreement to host the Grass/Sand Championships, and will host the State Championships qualifying event this year after Golf NSW decided to take qualifying events to the country for the first time.

Golf NSW Chairman John Robinson said qualifiers had been taken to the country to provide greater opportunities for regional golfers to have a go at making the State Championships. Forbes Mayor Phyllis Miller said Council was “honoured” to partner with both events as well.

The State Championships qualifier will be held on June 18 and 19, while the Sand/Grass event will be August 20-21.