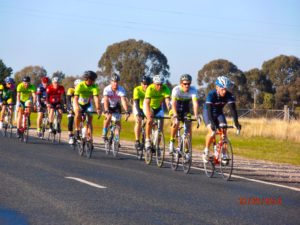 Around fifty riders from Canberra, Dubbo, Orange, Young, Bathurst and Condobolin converged on Forbes on Sunday May 22 for the first ever Forbes Flat Land Cyclo Sportif event organised by the Forbes Cycling Club. Both Chris Haggerty and Julianna Kneebone, from the Forbes Club were very happy with the numbers and were surprised at how far competitors were willing to travel to participate in the event.

The Forbes Aquatic Centre marked the start and finish of the race and riders began arriving at 6.30am to prepare for the start of the 120km course at 8.45am. Twelve riders completed the 120km with Michael Cooper from Dubbo crossing the finish line in 3 hours and 18 minutes, Tully Richards and Phil Tudor, both from Orange, were 2nd and 3rd.

The 72km event proved the most popular with almost 40 riders. There was a dead heat for first place with husband and wife team, Rob & Mel Webb from Young crossing together with a time of 2 hours 25 minutes. Third place went to Ian Morgan from Mudgee. Awards were also given for eldest and youngest male and female to finish in each event, as well as best families. Matt Hancock, member of the Forbes Cycling Club, said “There were a lot of families riding, so we did our best to acknowledge that on the day”. Andrew & Janet Norton
from Cudal took out the honours for oldest male and female to compete while Jessica Morgan-Thomas from Orange and Michael Shaw who works for Crowe Horwath in Forbes were the youngest female and male riders to finish.

Forbes Cycling Club members all contributed to the success of the event, each person did a specific job which utilised their unique skillset or area of expertise, Chris mentioned and they will commence planning for next year’s event in the coming months.

The Forbes Cycling Club have a membership of around 24 and encourage new members of all abilities to come along to their weekly rides on Tuesday and Thursday evenings. They meet in Harold Street at about 5.30pm and do a variety of courses of approximately 30kms which takes on average about 1-2 hours.
By Anita Morrison