You are here: Home / Articles / Forbes Christmas Carnival A Night To Remember 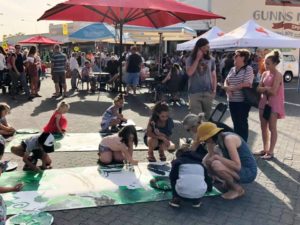 Hordes of people flocked to Templar and Rankin Streets last Friday to enjoy the Christmas Carnival and some late-night shopping that was topped off with ideal weather.

There was much to see and do for the young and the young at heart, such as rides on the tea cups, jumping castles and Hector, the bucking bull. Artistic talents were on show with the Street Art and kids got involved in exciting games.

Forbes Business Chamber Chairperson, Marg Duggan expressed her gratitude to everyone that assisted with the event and congratulated the draw winners of the Find It In Forbes Christmas Promotion.

“Congratulations to all of our winners! We would also like to thank the community for their support, especially to those businesses that loaned equipment and the wonderful volunteers that assisted with set-up and pack-up. They are absolutely amazing and made the job so much easier,” said Marg.

The winners of the 2 x $100 ‘Why Leave Town’ draws for the social media competition were:
• Draw 1: Larissa Moore
• Draw 2: Alex Hutchings

The major draws will be held on 24th December on the corner of Battye and Rankin Streets from 11:30am. Tim Redfern from Lachlan Readymix will load the tickets at approximately 11am into the concrete mixer.

“We would also like to thank the supporters for the Find It In Forbes Promotion which are Forbes Livestock, Forbes Toyota, Hazel and Field Accountants, Hughes and Co, Kevin Miller, Whitty Lennon & Co, MCC Forbes, MidPro Engineering, Midwest Pest and WA Knights,” said Marg.