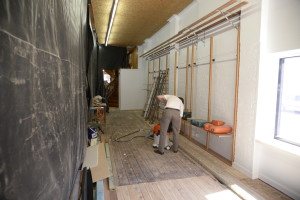 Businesses in Forbes Town Centre have been undergoing improvement works, with at least three shops improving their facilities for customers. Gunn’s Menswear on Rankin Street is undergoing major renovations, and Eyewear

Specs down the road opened for business just this week after renovating their shop. Cint on Rankin Street re-opened on Tuesday after closing while their renovations took place, while the work at Gunn’s have recently started.

Owner of Gunn’s Menswear, Greg Gunn, said renovations at his store would take at least six weeks. “We’re revamping the floors, and the walls are going to go back to their original brick work appearance,” he said.

Mr Gunn also plans to rearrange the items in his store by bringing surf wear from the back to the front right hand side, while work wear and hats will be shifted to the back.

All school wear and embroidery will be moved upstairs, while all mens wear will be located at the front left of the shop, which is the first section currently under renovations. Mr Gunn said he looked forward to seeing the end of the renovations.

“It will be a minimum of six weeks, but there’s every chance it could still be longer, but it will all be worth it at the end of the day,” he said. Eyewear Specs owner Fiona Hayward officially opened her new store on Rankin Street after spending the past few weeks preparing the store.

“I’m very excited to have opened, but the support of other businesses has been great too.”