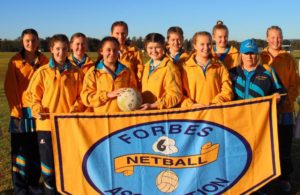 We started well with a 21 – 14 loss against eventual winners, Nambucca Valley, followed by a 17 – 9 win against Wollondilly. The last three games of the day were tough, but the girls never gave up and stayed competitive.
Day two showed mixed results, with wins over Tamworth and Griffith, and although going down to both South Canberra and Eurobodalla, we equalled their second half scores, showing that we had to work on the intensity of our game from the first centre pass.

Day three was a good day for the team, and although we didn’t record a win, we stayed competitive. Forbes 14 year representative team displayed great sportsmanship, determination and fair play and were a credit to themselves, their families and Forbes Netball Association. The girls and I would like to thank the parents for their support and assistance at carnivals and at State Age, making sure there was someone to score every game, keep water bottles filled and organise food for us after each game.

The team was selected in March, and has been training twice a week since selection, attending training carnivals, and playing in the open division of the local Saturday competition. These girls have also stepped up as role models to the younger players in the association by coaching a younger team, or umpiring the junior games.

By Robyn Kenny and Lyn Ford