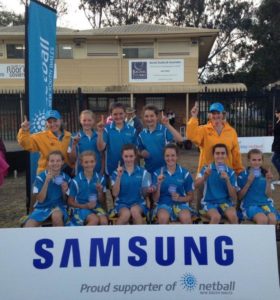 The Championship is the largest female sporting event in the southern hemisphere with more than 3, 000 athletes, 309 teams, over 400 coaches and 500 umpires taking part. Sapphire Coast was the first game for the Forbes 12s, who won it 26-3. The team continued pulling off big wins with goal counts of 22-8 against Macleay, 27-2 against Kiama, 15-7 against Lower Clarence, 34 1 against Narrabri and 27-6 against Kurri Kurri.

This put the Forbes 12s in the spotlight as they finished undefeated and on top of the ladder after Day 1. Unfortunately a bug spread among the team on Day 2 taking many players ill. The healthy players kept the team together and exhausted themselves playing every game. They lost the first game to Taree 9 8, but a great win against Gunnedah 19-1 set up an exciting game against Nelson Bay, who was still undefeated. The courageous Forbes players won the game 12-10. The team finished off the day with more great wins over Port Stephens, Temora, Inverell, and Mudgee.

On Day 3 huge wins were recorded against Armidale, Casino, Leeton, Young, Cessnock, Coonabarabran and the final game stamped the division 4 win with a goal count playing against Blayney of 38-2. All games were timed at 24 minutes, so a massive effort from all the team of 12 year olds.

The team scored 460 goals and recorded 96 against over 7 games each day, totalling 21 games of netball. This resulted in a goal percentage of 22.82. Nelson Bay came second on a goal count of 13.78, after both teams had lost one game each over the weekend. This brave team of 12 year olds were a pleasure to coach every minute of our training and playing together.

Thank you to all the parents who also supported me, and the girls. Without that help, especially during Day 2 when the girls were so sick, the team could not have pulled off such an outstanding result.