Home » For The Love Of Elvis 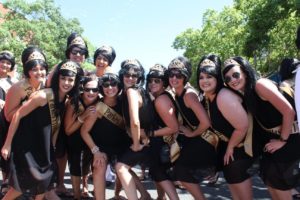 Whilst a record-breaking 25,000 fans congregated in Parkes for the 25th Elvis Festival, Forbes also hosted events to complement the festivities. Forbes Shire Council provided a bus service between Forbes and Parkes, run by Cenwestours, for residents and visitors to
attend the festival. Over five days almost 1,000 people were transported in two buses in more than 56 trips covering more than 2,600km.

When the Phoenix caught up with the 1.00 pm shuttle service on Saturday there were no spare seats and the atmosphere was certainly electric. Forbes Shire Council’s Director of Tourism, Community and Cultural Development, Richard Morgan, said the Parkes Elvis Festival had a very positive impact on Forbes. “During the Elvis Festival just about every bed available was occupied.” Bill and Kirsten of Kosmik Country Duo hosted Elvis Karoake at the Forbes Services Memorial Club where a crowd of nearly 60 sang their hearts out to their
favourite Elvis songs including ‘All Shook Up’, ‘Suspicious Minds’, and nobody could ask ‘Are you Lonesome Tonight?’

The Forbes Youth & Community Centre joined the fun and Spectacular Screening showed the theme movie of the Parkes Elvis Festival, the 1964 Elvis film Viva Las Vegas to mostly Forbes locals. The Phoenix caught up with Ray Beacroft who is Ray of Elvis after his final show at the Forbes Golf and Sportsman Club. “Forbes is close to my heart,” said Ray, “My wife and I lived here from 1988 to 1992 and our daughter was born here.” As a child Ray dreamed of singing Elvis songs and being a tribute artist. As he got older he enjoyed attending the Elvis Festival in Parkes and it was there he was encouraged to take the plunge so to speak….and the rest is history. “I really want to pay tribute to Elvis,” said Ray and the crowd all agreed that he most certainly did.