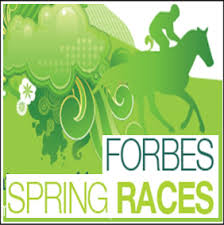 The Forbes Spring Races have been rescheduled and rebranded and will be on Saturday, 19th November. The new event will be called the Spring Flood Recovery Cup and the Forbes Jockey Club will have an array of activities to help the community recover from the floods. “The aim of the flood recovery cup is to provide a chance for the locals to come together after an extremely difficult time and celebrate the resilience of our community,” said Secretary of the Forbes Jockey Club, Blake Nicholson.

Footraces will be replaced by a sandbag challenge where participants will have to ferry as many sandbags as possible in two minutes with a cash prize for the winner. Fashions on the Field have a new category of best flood outfit with extra points awarded for water or nautical themed clothing. Extra points will also be awarded for clothing that contains floodwater brown. Races will be named in flood themes with the main race being the Bankstown Sports
Swamp Rat Flood Cup. Other races will include Mandagery Creek Mile (named after Eugowra Creek that feeds the Lachlan River), the Southern Cross Sprint (named after the area east of Forbes that feeds major floods), the Iron Bridge Handicap (where river levels are managed), the Roads Closed Handicap (transport difficulties) and the Farmers’ Flood Maiden (named for the fact the flood have disproportionally affected primary producers).

A significant donation will also be made to the Lions Club disaster relief fund for the work they have done to assist the community. “The meeting doesn’t aim to take itself too seriously and it’s supposed to be a day of fun. However we do acknowledge that many people have lost their income and one person lost his life,” Blake said. Marquee bookings are available by calling 0439 911 052.