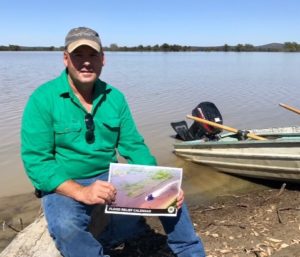 The Forbes farmer who used his love of flying and photography to bring national and even international awareness of the devastating floods, has produced a flood relief calendar for 2017. Brad Shephard compiled twelve photos of
the floods around Forbes, Condobolin, Lake Cowal and towards Eugowra for the calendar of which 50% of proceeds will be going to the Lions Club Flood Appeal.

He thought of compiling the calendar after his flood photos created so much awareness on social media and people encouraged him to do something to help raise funds. Brad was one of the farmers who suffered severe crop losses when up to 90% of his barley and wheat crops went under water. He said of the 300 acres of barley he had left, half of it was later destroyed by a hailstorm. He said he still had floodwater covering a couple of 1,000 acres on his farm. “At the moment I am just contracting and thinking of share farming for the future.”

With losses estimated to be more than $500 million for farmers, Brad said it was going to be a tough Christmas for many. “At the moment most of them are getting on with the job doing contract work or stripping what was left of their crops, but after the harvest things will quiet down.” As a survivor of depression, Brad had expressed concern for the mental well being of affected farmers after the floods. He said there were a lot of sad stories and the community
needed all the help they could get.

You can help by purchasing a calendar for $25 online at http://www.farmerfromdownunder.photography.com.au Calendars are also available at AgNVet stores in Forbes, Condobolin and West Wyalong, Esme’s Coffee Shop, Kenny’s Baa Moo Oink Meats in Forbes and Sprayer Barn in Parkes.