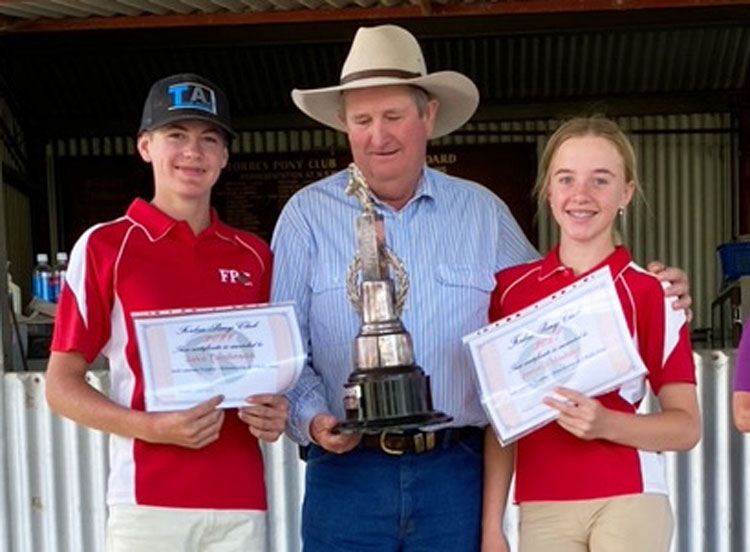 PONY CLUB PRESENTATIONS: Laurie Norris with Jake Tomlinson and Jemma Hodder at the recent Forbes Pony Club presentation. Forbes Pony Club is the biggest in the region and encourages any interested community members to come along. Photo supplied.

President Gary Tomlinson was thrilled with the roll up that included riders of all ages. “Rally days are a great way to build riders’ skills, and for them to have fun and make new friends” said Mr Tomlinson.

“We broke riders into four groups and worked through activities such as basic drills, bending, dressage, obstacle exercises, safety tips and finished with the flag race and some six-bar jumping. It was great to see some big smiles on faces as members mastered the activities of the day.”

The event also featured the presentation of the 2021 Pony Club awards recognising significant achievements of members for the year. Former president Laurie Norris explained that many of the trophies awarded were very special, acknowledging past riders who had contributed to Forbes Pony Club, with some awards having a sixty year history. Mr Norris went on to say how proud he was of the success of these riders.

The club would like to remind everyone that Pony Club is open to everyone wanting to learn horsemanship skills in a safe and friendly environment. Memberships are open now and to enquire contact Forbes Pony Club via Facebook or Instagram or by emailing forbesponyclub@gmail.com