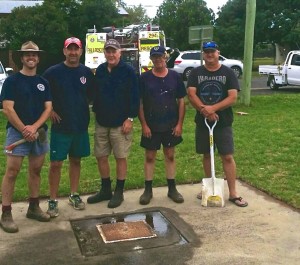 Twenty-five teams of firefighters from across NSW will converge on Forbes
this weekend for the Regional Firefighter Championships. The event will be held at Stephan Field between 8am and 3pm on Saturday, and 8am and 1pm on Sunday.

Each team will compete in 11 different events across the two days of competition, with each event designed to simulate a real-life firefighting exercise. Teams will be timed in each event, with the fastest time to be declared the winner.

Ten local firefighters from Forbes will compete, with two teams featuring five
members each, and an invitational team from the Parkes Rural Fire Service will also join in, even though the event is normally just for the NSW Fire and Rescue Service.

It won’t just be local firies competing though, with others coming from as far as Bega, Nowra, Port Macquarie, Broken Hill, Dubbo and Tamworth. Forbes fire fighter Andrew Rousell said an example of an event that would be held
over the weekend would be the ‘breathing apparatus’ event, where competitors would simulate a house fire.

“We’ve only got 2000 litres of water in a fire truck, so if you get the hoses going hard, that sucks it up pretty quick, so you’ve got to look for a hydrant to supplement your water supply.”

Mr Rousell said the championship events actually helped with real-life firefighting training, and that the Forbes squadron was looking forward to the event.