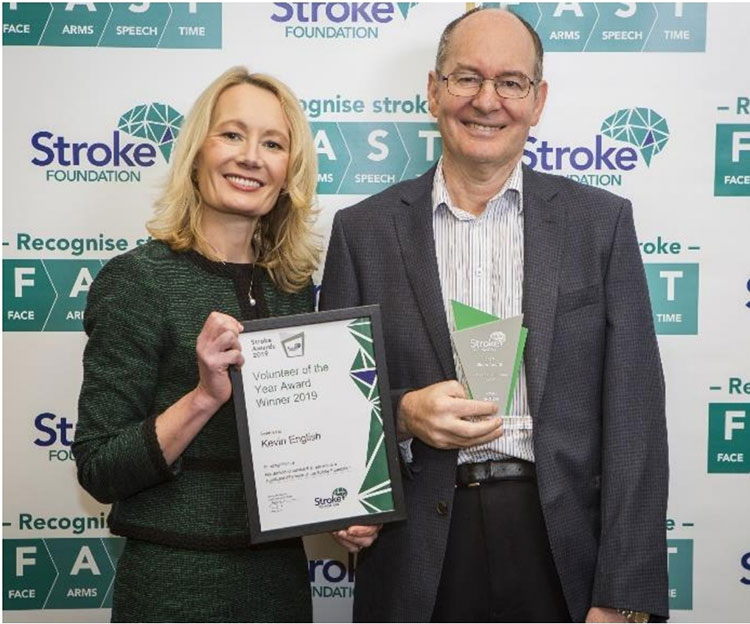 Time is running out to nominate an inspirational person in your community for the Stroke Foundation’s 2020 Stroke Awards.

The Stroke Awards are held annually and recognise individuals who have gone above and beyond to make life better for people with stroke. These include carers, stroke survivors, researchers, health professionals, volunteers and members of the community.

Winner of the 2019 Volunteer of the Year Award, Kevin English, said it was a tremendous honour to be named as a finalist in his category, let alone win the award.

“There are so many people in the community striving to make the future brighter for people impacted by stroke. I was thrilled to be recognised for my volunteering efforts at Stroke Foundation,” Kevin said.

Stroke is one of Australia’s biggest killers and a leading cause of disability. It happens in an instant and its impact can be devastating.

Stroke Foundation Chief Executive Officer Sharon McGowan said Kevin was a wonderful example of someone strongly committed to raising awareness of stroke and prevention. Kevin’s contribution has included volunteering with the Stroke Foundation for six years. He was trained as a StrokeSafe Ambassador in 2013, is a member of the Stroke Foundation Consumer Council as well as assisting Safer Care Victoria.

Winners will be announced at the Stroke Foundation’s Stroke Awards ceremony in Melbourne on 5th May.