You are here: Home / Articles / Fighting Driver Fatigue, One Cuppa At A Time 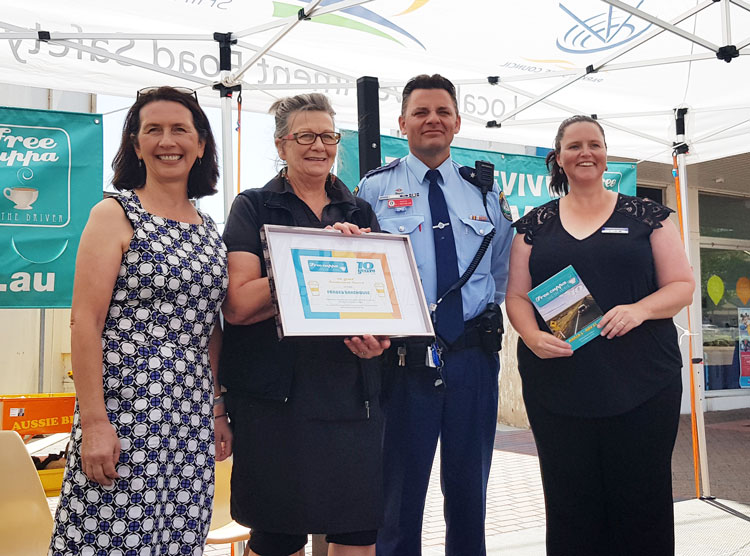 Jenny Webb, Kerrie Hodder, Ben Macfarlane and Melanie Suitor at the Free Cuppa For the Driver morning tea in Templar Street, Forbes. Kerrie Hodder from the Bakehouse, Forbes, was honoured for 10 years of support for the initiative.

Last Thursday saw business owners, members of the public, Road Safety Officers, Police officers and representatives from various regional Councils converge in Templar Street Forbes for the 10 year launch of the Free Cuppa For The Driver safety initiative which runs from 1st March to 21st May.

Road and Safety Officer for the Forbes, Parkes and Lachlan Shire Councils, Melanie Suitor, was Master of Ceremonies. Melanie introduced Inspector Ben Macfarlane from Dubbo, who spoke about the dangers of driver fatigue and the frustration police feel at being unable to police and prevent it. Forbes Shire Council Deputy Mayor Jenny Webb also spoke and gave a heartfelt thanks to local businesses who are supporting the initiative.

Kerrie Hodder, owner of the Forbes Bakehouse, who has been involved in the initiative for the 10 years that it has been running, was presented with a certificate of appreciation for her long time support.

Guests enjoyed a free cuppa and piece of cake while they mingled after the ceremony. The initiative, which impressively encompasses 15 Councils and over 80 businesses, aims to tackle driver fatigue by encouraging drivers to stop and take a break when driving long distances.

Drivers who are travelling 100km or more away from home can claim a free cup of tea or coffee from participating businesses, whilst there, drivers can go into the draw to win fuel vouchers by filling in an entry form and dropping it into the entry box in-store.