You are here: Home / Articles / Female ‘Tradie’ Paving The Way For Others 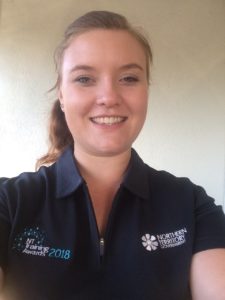 Former local, Kacie Anderson is again flying the flag high for Forbes in a male dominated trade. The 24-year-old, female fabricator and welder-boilermaker, forms part of a small handful in Australia and has been nominated for yet another award.

This time Kacie has been named as a finalist in the Austin Asche Apprentice of the Year Award. Organised by the Department of Trade, Business and Innovation, this is the Northern Territory’s premier training awards.

The only female apprentice in her trade, Kacie was described as “an outstanding choice, having excelled academically and as a practitioner of her craft,” by Roy Brandner, Head of School of Trades at Charles Darwin University.

Turn back the clock, Kacie started working at Jakes Steel & Welding in Darwin as a labourer nearly four years ago and was offered an apprenticeship within two months. Since then, Kacie has been going from strength to strength, having just completed a Certificate III in engineering and heavy fabrication.

“Lots of women are becoming tradies nowadays. I say to them, ‘Give it a go!’ It may be tough at times but if you’re determined and dedicated, you’ll get there and show everyone what you can achieve!” said Kacie.

Winners of the Northern Territory Training Awards will be announced at a dinner at the Darwin Convention Centre on Saturday, 22nd September.