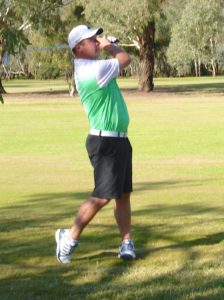 It took a play-off between two top players to decide the winner of the 2017 Forbes Open.

The Forbes Open, jointly sponsored by the Golf and Sportsman’s Hotel and Daniel Newton On-Par Golf, attracted many top line golfers with the opportunity to qualify for the GolfNSW Open as the event is a regional qualifying event.

The place in the GolfNSW Senior Open was won by Rob Martin from Lakelands with a par round of 72. The spot for a play- er and two friends to play in the NSW Open Pro-Am was won by local stalwart Peter Cowhan with the best nett score of the day of 68.

Nearly half the field of 114 comprised A-graders (of whom 12 were on zero or lower) with many of those travelling from Orange, Sydney, Narrabri, Newcastle and the Hunter, Nelson Bay, Condobolin, Canberra, West Wyalong, Young and Southern Queensland.