Home » Embrace Humanity In All Its Diversity 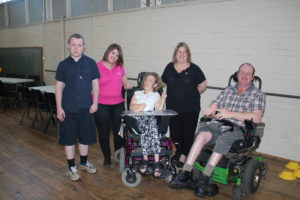 What a celebration! There were games including croquet, bocce and volleyball. And let’s not forget the DJ Disco, drum workshop or the face painting with participants choosing to turn into transformers, spiders and even snakes! Joshua Cowling summed it up perfectly: ‘It was fun!’ Forbes International Day of People with a Disability (IDPwD) was held on Tuesday at the Forbes Youth and Community Centre. DJ Paulie played an amazing mix of music including golden oldies, hip hop, rap, right through to modern pop. There was also an impromptu dance performance from the House with No Steps dancers fresh from the Kristen School of Dance concert.

The 50 plus audience loved the dance performance to Uptown Funk and really got involved with one of their all-time favourites,
Gangnam Style. The Drum Workshop was extremely popular. “Absolutely everyone participated,” said Blake Nicholson, Forbes Council’s
Community Relations Officer. Martin Bates, Linker from AbilityLinks NSW took the lead with the drums and got everyone finger tapping with bongos and African drums. “There were so many smiles, everyone really enjoyed themselves. It was a fantastic atmosphere,” said Blake.

Blake also organised a bbq lunch. Everyone enjoyed the sausage sandwiches and the dessert treat of either gelato or Neapolitan ice-cream cones. So what is IDPwD? It is a United Nations and internationally sanctioned day that celebrates abilities and assists to break down
disability barriers that may exist in communities. Forbes IDPwD was a collaborative effort between Forbes Shire Council and House with No Steps. It was a day reflecting the statement of United Nations Secretary-General Ban Kimoon: “Let us work together for the full and
equal participation of persons with disabilities in an inclusive and sustainable world that embraces humanity in all its diversity.”