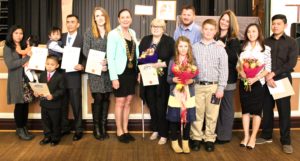 Mayor Phyllis Miller welcomed 11 new Australian citizens at a citizenship ceremony held in the Forbes Town Hall on Tuesday. The Mayor read a welcome message from the Minister for Immigration and Border Protection, Peter Dutton, in which he said: “People of all backgrounds and religions strengthen our country and only together, united will our future be as strong as our present and past. Thank you for taking this important step today. Australian citizenship confers on you great benefits; but equally rights and obligations. Congratulations and best wishes.”

The 11 new citizens are Valarie Currington and Frances Parry from England, Bryan Huynh and Thanh Nguyen from Vietnam, Hendri, Marno, Melandri and Linda van Coller from South Africa, Erlinda, Virgilio and Rain Terrado from the Philippines. The ceremony was conducted as prescribed in the Australian Citizenship Act 2007 with the candidates reciting the oath to the Mayor who is authorised as a person who may receive the pledge.

Each candidate received an official citizenship certificate and a bunch of flowers from the Mayor. It was a happy occasion for the new citizens who invited friends and family to celebrate such an historic event with them. Most of them agreed becoming a citizen made them feel part of the community.