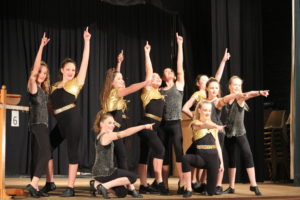 Competition among schools has increased in the 23rd annual Forbes Eisteddfod, which ended in Forbes yesterday. With prize money of $500 for the school with the most points, there has been a rise in entries from schools this year, according to Helen Hurley, President of the Forbes Eisteddfod Committee.

Helen said approximately 1,400 entries were received for the eight different categories. This meant more than 2,000 children and adults went across the stage for the five days of the Eisteddfod. Every session had a packed Town Hall to capacity with about 200 parents in attendance.

Participants not only came from Forbes but from all over the Central West and even further afield, including Grenfell, Parkes, Bathurst, Griffith and Leeton. The individual categories were open to participants of all ages. The competition started on Saturday with piano, and vocal on Sunday. On Monday the first school groups were on stage in the instrumental category, while the speech and drama section was on Tuesday. The most popular category this year, school dance groups, had its turn on Wednesday. Many schools entered for this competition. Other categories for groups were for bands and school choirs.

On Tuesday the Red Bend Catholic College choir were awarded a first place. Each category had prize money, medals or scholarships to be won. There were 250 scholarships, which cover tuition fees, up for grabs. The adjudicator this year was Mel Philip from Toowoomba. She is qualified under Eisteddfod rules and able to judge all the different categories.

Helen said the individual dance competition of the Eisteddfod would take place during the second week of the school holiday. A different adjudicator, who can judge all types of dance, has been asked for this competition.

A voluntary committee giving talented people in the region a platform to perform every year runs the Forbes Eisteddfod. The idea for an Eisteddfod dates back to the 12th century in Wales when it was a Welsh festival of literature, music and performance.

The current format comes from an 18th century revival of the Eisteddfod. There are many Eisteddfods held across Australia, including the Australian National Eisteddfod.