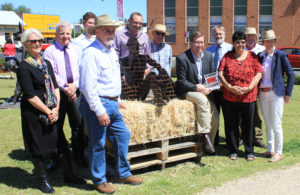 The Wiradjuri Dreaming Centre will triple in size after $270,000 in funding was announced last Friday. It will see the installation of nine new sculptures, an amphitheatre, interpretive panels, additional Wiradjuri artworks and
the planting of 200 native shrubs and trees on the Lake Forbes foreshore. It also includes the erection of a building to display Wiradjuri artefacts and host workshops and cultural activities.

Deputy Mayor Grant Clifton said the expansion would be a significant boost to tourism and culture in the Forbes Shire. “From an economic and tourism point of view this will really put Forbes in the spotlight.” The Forbes Art Society, in conjunction with Wiradjuri Dreaming Centre Incorporated, led the project application with assistance from Forbes Shire Council’s Grants Officer Andrew Rawsthorne.

Deputy Premier and Minister for the Arts, Troy Grant, who made the announcement, praised the Forbes Art Society for the quality of their proposal. “The funding is highly sought after but this project stacked up on a number of fronts,” he said. President of the Forbes Art Society, Dr Keith Mullette, said work on the project would start early next year and would be completed within two years. He said the Art Society had worked hand in hand with the local Aboriginal community to create the idea.

The funds will be provided under the NSW Government’s ClubGRANTS category 3 scheme for arts and culture.