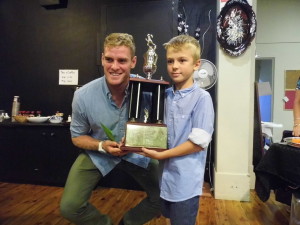 Tom Drane is a promising Young Motorbike Rider, who at the age of only 9 years of age won the 2015 Forbes Sportsperson of the Award on Saturday night. Although there have been many juniors, including his own father Matt in 2000 & 2001, Tom is the youngest to have won this award. Tom’s natural talent for the sport, enabling him to win State and National Titles in 2015, obviously impressed the independent judging panel who selected him from a huge pool of worthy nominees.

Juniors dominated the awards on Saturday night with Aurella White – Umpire/Referee/Official of the Year, Ellie Flick – All Rounder, Brooke Kelly – Phillip Adams Encouragement and Darcy Leadbitter – Runner-Up. Junior Sportsperson of the Year was won by Fyn Harrison with Darcie Morrison taking out the Senior category.

Harness Racing Duo Jason Gaffney & Murray Sullivan Jnr also featured in the
presentation with Jason Coach/Trainer of the Year and Murray receiving the Presidents Award. Kristen’s Dance Studio Open Dance Troupe took out the Team honours and the Forbes Magpies Rugby League Committee claimed the Administration Award. A humbled and shocked Sue Uphill was a popular winner of the Terry Wade Memorial Award for her many years of volunteer
service in a variety of organisations within the community.

Australian Rugby 7’s player, Tom Cusack was very impressed with the achievements of all of the nominees but in particular the winners. Tom enlightened the crowd, in excess of 120, of the pathways he followed to
get to the position he is in today and of his plans for the future.

The Forbes Sportsperson of the Year Association will be holding their Annual General Meeting on Tuesday 22nd March at the Forbes Sport & Recreation Club commencing at 6.30pm and invite interested people to come along and join the committee so that they can continue to recognise and reward the our local sporting heroes. Nomination for the 2016 Awards are now open and you are encouraged to submit nominations at any time throughout the year.