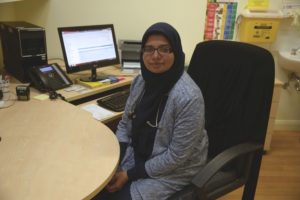 New Forbes Medical Centre Registrar Dr Maria Rasool says she is enjoying the rural lifestyle of Forbes three months in to her 12-month stint at the practice. Dr Rasool, originally from Pakistan, relocated to Forbes in February, and has
signed a 12-month contract to work in Forbes.

“It’s a different lifestyle for what we’re used to, but it’s been a great change for my family. My daughter plays netball and she is loving it, and we’re really looking forward to travelling around to the different carnivals that the netball teams play at,” she said. While it has been a great move for her family, on a personal note, Dr Rasool said it has also been a great change for her. “I’m enjoying having the weekends free and travelling around the Central West to see what there is to see and do,” she said. Dr Rasool moved to Forbes from Fairfield in Sydney, where she worked at Fairfield Hospital.

She has also worked at St George Hospital in Sydney and Griffith Hospital in the NSW Riverina.

She is currently studying for her final GP exam early next year while she works at the Forbes Medical Centre. Being her first role as a GP, she said she enjoys it more than hospital work. “You get to know your patients so much better, especially in a rural setting,” she said.