You are here: Home / Articles / Dirtgirl Live At The Greenhouse 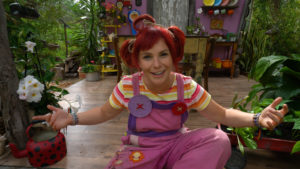 Dirtgirl is heading to The Greenhouse in Orange. Dirtgirl is a gumboot wearing, planet-loving girl – oh, and she’s also a rockstar who loves to sing and dance almost as much as she loves getting grubby (almost!).

Late 2017 saw dirtgirl launch a new show about her life. From the EMMY Award winning makers of the International hit animation, dirtgirlworld, comes Get Grubby TV (GGTV). Like the cartoon, GGTV is yet again a celebration of life outside set to music that the whole family can dig!

GGTV has reimagined the dirtgirlworld story to reveal the real place and the real characters… in the real world! As well as Costa the Garden Gnome (Costa Georgiadis), dirtgirl and scrapboy have some other new friends. Well actually, dirtgirl has a new band – an all-girl band and they seriously rock!

These musicians are home grown but know how to wow crowds around the world – as their other day job is as beloved international act, the Hussy Hicks. Accomplished guitarist and vocalist, Jules Parker stands alongside vocal powerhouse (and sometimes rockin’ drummer), Leesa Gentz, to form the heart of the Hussy Hicks. They are often joined by Tracy Bassy and on some special occasions, Kristy Gentz.

“I thought my place couldn’t get any better, and then the girls moved in next door; now we definitely have the most rockin’ neighbourhood around!” says dirtgirl.

For those who really want something more in their grubby hands, dirtgirl also features alongside other beloved family stars of ABC KIDS on the new release Let’s Play – Holiday Fun With Friends.

Dirtgirl World Live will be at The Greenhouse of Orange on Thursday, 8th November doing three shows at 10am, 1pm and 4pm to buy tickets head to www.thegreenhouseoforange.com.au.