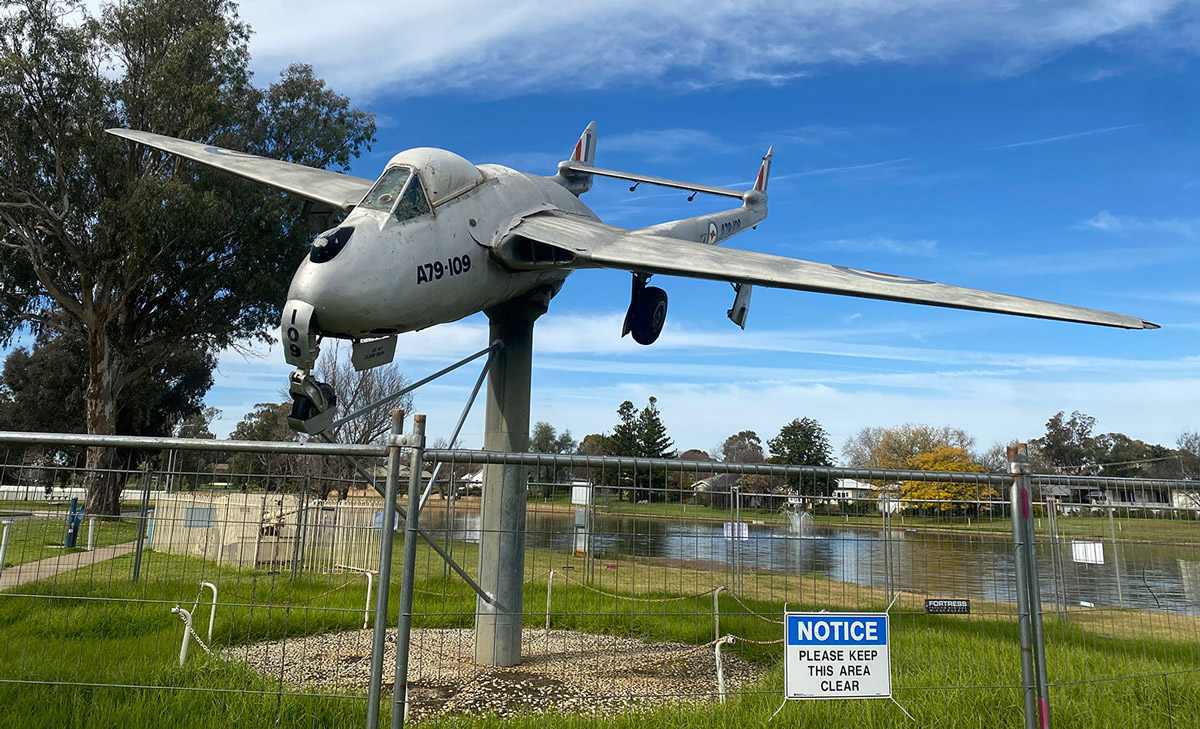 The De Havilland Jet near Apex Park has been fenced off for some time and will have to come down for an assessment because of its safety risk to the public.

The De Havilland Jet, which flew during the Korean war, has been a well-known landmark at Lake Forbes since 1971.

The jet crash landed just west of Forbes in the 1950’s, and was then grounded and used as a training aircraft before it was purchased by the Forbes Shire Council for the 50th anniversary of the Royal Australian Air Force (RAAF).

The Australian made aircraft has survived a battering over the years but sadly the general wear and tear combined with acidic pigeon droppings has caused the nose to separate from the jet’s body. This has led to a decision to take the plane down from its display pole near Apex Park as it has become a public safety risk.

“It would be remiss not to take it down. It’s quite dangerous,” said Forbes Shire Mayor Phyliss Miller. She reassured the community that the plane would be back eventually. “We need to take it down to assess what needs to be done to restore it, we then need to do a budget for that and then we will fix it and put it back up on the pole. We are not taking the plane away,” she said in a video message on Facebook this week.

She said it was very important to keep the plan on the pole, and that the various rumours circulating about the plane were not true.

Mike De La Hunt from the HARS Parkes Aviation Museum, who has repaired aircraft of the same model, told the ABC he estimated it could cost anywhere between $10,000 to $100,000, depending on how many volunteers put their hands up.

“It should come down quickly if the goal is to preserve its significant history,” he said. “In similar cases, we have replaced the wooden features with fibreglass to preserve its appearance but making it weatherproof and lightweight.

It won’t be straightforward, but it will certainly be worthwhile, there is no reason it couldn’t be up the for another 20 odd years,” said Mike.